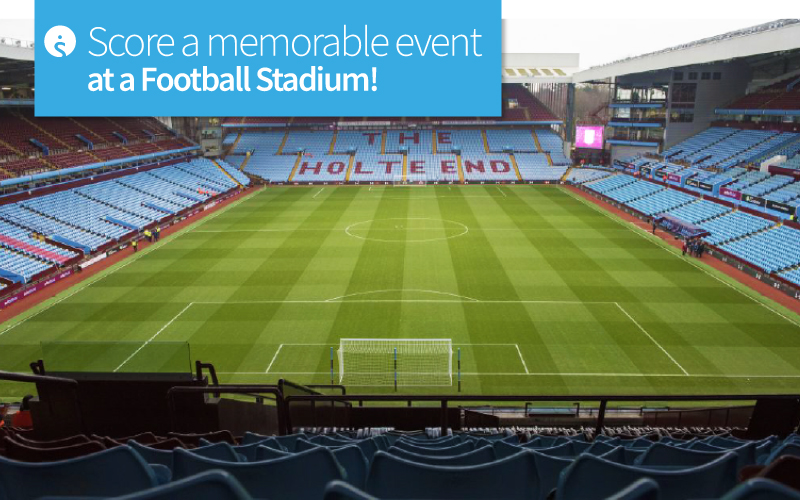 Dating back to March 1872, the first FA Cup final was held at Kennington Oval in London. The teams playing were Wanderers and Royal Engineers. The FA Cup is the oldest football competition in the world and thousands of loyal football fans come together each season in the hope that their team will qualify for the final at Wembley Stadium.

This season, Watford Football Club and Manchester City Football Club will meet on the famous turf, having secured their places in the final and in the football history books. Will it be 90 minutes of the glorious game? Or will the winners of the FA Cup final be decided in extra time or with a heartbreaking penalty shootout?

Whichever team finishes victorious, both these football club’s stadiums provide excellent facilities for the corporate world. And we don’t just mean match day hospitality for entertaining clients or rewarding staff! To celebrate the FA Cup final this weekend, we’re turning the flood lights on to take a closer look at the superb conferencing facilities at Manchester City Football Club and Watford Football Club.

The Etihad Stadium is the proud home of Manchester City Football Club. The club is no stranger to the FA Cup final having won the trophy an impressive five times. And the silverware collection is destined to grow more with Man City’s recent premier league win too!

The stadium offers impressive facilities for a large scale or small business events, presentations and product launches. Boasting six individually themed suites, from the glass fronted Mancunian Suite that overlooks the pitch, to the Commonwealth Suite recalling the passion of the Commonwealth Games which were hosted here in 2002; it’s a winning selection of spaces that are certain to excite delegates and guests.

Furthermore, there are 66 platinum boxes with magnificent views of the pitch. These are perfect for a small dinner or meeting as well as entertaining clients with match day hospitality next season.

Situated just minutes away from Manchester city centre, the Etihad stadium has ample parking for up to 2,500 vehicles.

Head Chef Leon Smith and his team offer a championship winning menu for your event. They support local produce from regional farms, fields, lanes and rivers! Your guests will not go hungry when they’ve tasted the splendid food on offer at the Etihad Stadium. And as Manchester City FC are the newly crowned Premier league champions, if you host you’re next event at the Etihad Stadium, your delegates are certainly following in the steps of champions.

It’s been a while since Watford Football Club has played in an FA Cup Final but their hard work and determination this season has paid off and they will be on the Wembley pitch this Saturday! Their last FA cup appearance was in 1984 when they were runners-up to Everton FC.

The Vicarage Road Stadium houses eight purpose-built suites plus 19 executive boxes. The Captain’s Bar can hold up to 300 delegates for events such as conferences and corporate celebrations. The Executive boxes can host up to 10 guests in a boardroom layout.

If you’re requiring catering for your event, the in-house chef has gathered a collection of dishes and embedded them into a variety of menus. Called ‘Ancient and Modern’, these menus bring together classic and traditional dishes with new and modern options.

Watford Football Club is easy for delegates to access because Watford has its own London underground tube station on the Metropolitan Line and is just under one mile from Vicarage Road. And their journey to Wembley on Saturday will be a quick one too!

The popularity of football is never going to wane. And, now with this year’s season winners decided, it’s an ideal time to hire the facilities of a football club. Whether for a corporate meeting, conference, product launch or even a summer celebration, the following football stadiums are all winners.

Start as you mean to go on at this football stadium! Norwich City Football Club is celebrating promotion from the Championship League to the Premier League! The football team and their fans have forgotten their loss to Portsmouth in the third round of the FA Cup!

The Carrow Road stadium is home to 17 function rooms, varying in size and accommodating up to 900 guests. Furthermore, the stadium also has 34 executive boxes that are ideal for smaller meetings for up to 25 delegates. And these executive boxes have stunning inspiring views of the football pitch!

The Carrow Road stadium has versatile space and well-equipped rooms for businesses to host meetings, conferences and presentations in addition to business and sales pitches. The events team are on hand to ensure your meeting runs smoothly. And they will see that you and your guests enjoy a truly memorable experience.

There are certainly no red cards when it comes to the catering by Delia’s Canary Catering! The legendary chef has created the delicious menus with her team of chefs. From finger buffets with sandwiches and pastries, to sit down meals at the end of an important meeting, the catering is sure to score highly with everyone.

Along with renown catering, the Carrow Road stadium is easily accessible and offers free car parking for up to 300 vehicles! So, if you’re looking for a meeting room or event space in Norfolk, Norwich City Football Club is a premier destination!

Steeped in history and home to Aston Villa Football Club, one of the longest standing clubs in the Championship League. Villa Park in Birmingham provides the corporate world of meetings and events with quality facilities and first class service. Whether it’s matchday or a non-matchday event, Aston Villa’s hospitality team deliver great service.

Villa Park has benefited from a number of renovations over the past ten years and offers a wide range of executive boxes, suites, restaurants and lounges located across the four stands, each with their own individual character and style. There are 96 executive boxes to choose from; all boasting pitch side views plus enough space to welcome 18 delegates to a meeting in a boardroom layout.

Furthermore, if you’re looking for a room that has enough space for 700 guests, then the Holte Suite is ideal. Located on the ground floor, the purpose-built suite has its own car park and a dedicated entrance. Plus the mezzanine level where delegates and guests can overlook the main suite is great for networking.

Aston Villa Football Club benefits from its Midlands location. It’s less than two miles from the M6 and has over 1,000 free car parking spaces. Villa Park is an exciting football stadium for hosting a one-off conference lasting 90 minutes or a season of events and meetings lasting until the final whistle is blown!

We think these football stadiums with their inspiring sporting tales are real crowd pleasers for corporate events. They offer superb facilities and are well versed in hosting large-scale events. In addition, these football stadiums are great for a smaller board meetings. We’re sure many chairmen and coaching teams have sat in these meeting rooms making big decisions and driving success! For more information on their facilities, services and rates, give our reservations team a call on 01775 843411 between 8:30am to 5:30pm on weekdays and they’ll be able to assist you. Or send an enquiry to reservations@findmeaconference.com