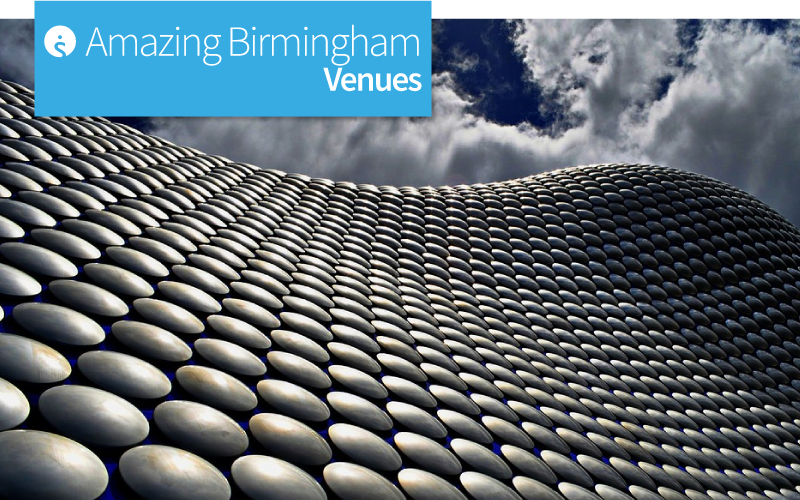 Birmingham is a major city in England which is well known for its historical contribution to the industrial revolution with landmarks that date back to the 18th Century. As a historical manufacturing powerhouse located in the West Midlands area of England, Birmingham also has the second largest metropolitan economy within the United Kingdom. It features a network of canals with well over 30+ miles of waterways; most of which radiate from Sherborne Wharf which has attracted a linear settlement of trendy bars and cafes that host and entertain visitors to this beautiful city.

Birmingham is recognised for its industrial background, active business environment and hard work ethics, but equally there is a fun side to the city with venues and sites filled with art, rich music, entertainment and culture. Birmingham can be described as a city where you can mix business with pleasure. The second largest city in the United Kingdom given its facilities, it hosts 34 million visitors a year, one million of these being international visitors. It possesses quality facilities to accommodate a rich variety of interests.

The following are five of the best venues in Birmingham that are perfectly suited for your corporate meetings, conferences or event conventions.

The International Conventional Centre (ICC) stands tall and wide with its magnificent modern architecture. This venue is located within the heart of the United Kingdom and is a top choice among Europe’s event organisers. This location has been designed and upgraded over the years to meet the different conference needs and requirements of the diverse national and international guests invited to attend events here.

The ICC boasts numerous first-class facilities that complement its reputation. In terms of interior spacing, the International Convention Centre prides itself on ten meeting rooms and ten additional conference halls. With such a vast structure, this venue is made utile for smaller meetings with relatively low attendees to large scale international conferences with a huge capacity. The conference halls within the ICC are amongst some of the standout features of this magnificent building. Its flagship auditorium Hall 1 and Hall 3 have the capacity to accommodate 3,000 delegates and can provide 3,000m of exhibition space, which makes this venue excellent for extremely large international events.

The ICC’s facilities include free WiFi in all the conference rooms as well as in all public areas. They also provide technical support with an AV production team and a dedicated event organizer. Event organisers can utilise one of UK’s largest media walls to make an occasion spectacular and memorable. Four hundred and fifty events have been hosted by the International Convention Centre within the last year, welcoming a cumulative of over 300,000 delegates. Its position as an international venue as well as its contribution to the British business and tourism sectors has been recognised and awarded.

Austin Court is a listed building located in the heart of Birmingham’s city centre which gives it an ideal position for delegates attending events. The venue is well known for its unique design which includes a beautiful combination of modern architecture, including its incredible glass atrium, and period feature designs which remain after its recent conversion.

The Austin Court venue is designed to make your next meeting, conference or corporate party a success. From its air-conditioned, raked floor theatre, a range of versatile amply sized rooms that can comfortably accommodate up to 150 guests, to a state-of-the-art auditorium and a team of professional staff at your disposal. Its central position in Birmingham gives it an added advantage both as an accessible meeting venue as well as an access granting venue. Its location puts it close to transport opportunities, both local and international, thus making it accessible. As an access granting venue, Austin Court is just off Broad Street on Brindleyplace development which is home to some of Birmingham’s most trendy bars and hotels. It is also conveniently located between the ICC and the National Indoor Arena not to mention its close proximity to some of Birmingham’s major attractions. It also features waterside views given its expedient positioning near one of the many Birmingham canals.

A part from its unique design and convenient positioning, the Austin Court offers state-of-the-art facilities and a team of professional technical and general staff, ranging from the audio-visual team to caterers. All of whom are friendly and dedicated to making your meeting or event the best.

Yes, this venue is Birmingham Football Club’s official training and home ground and it’s tailored to accommodate social and corporate events as well as football matches and tournaments! Birmingham City Football Club is conveniently located in the heart of Birmingham making it easily accessible to delegates and clients using all major road routes and motorway networks. The stadium is hard to miss even for a visitor arriving to Birmingham for the first time.

Aside from its convenient positioning, this venue provides extra amenities such as car parking space with a capacity of up to 200 vehicles. The on-site professional event planning team can advise on how to customise the venue including your own company branding and welcome messages for delegates. Table top and Christmas decorations can be arranged for themed events and celebrations. Birmingham City Football Club is a flexible hire venue  with in-house catering and welcomes private parties, dinner dances, sports dinners and children’s parties.  Its size makes it ideal for team-building exercises and treasure hunts too.

Built-in 1884, this building was initially an eye hospital. It now stands as a hotel within Birmingham city’s Jewellery Quarter and also as a landmark Victorian building bringing a sense of vintage beauty to Church Street Birmingham West. Hotel Du Vin Birmingham is listed among the best hotels in Birmingham and that’s not just because of its outward beauty. It features 66 rooms and suites, styled to meet different client needs in all aspects of business and pleasure.  It’s an ideal venue for a corporate meeting with the opportunity for fun and relaxation after a busy day of meetings.  And nothing says relaxation more than excellent cuisine, a beautiful canal view, a rich culture and an open-air courtyard with a retractable roof for those glorious summer evenings.

As one of the finest hotels in Birmingham and the United Kingdom, the Hotel Du Vin Birmingham offers a myriad of facilities for groups and individuals. These amenities include in-house massages, a health and beauty spa, beauty therapy and massage rooms. There are also team facilities such as a cocktail bar, a fitness centre, steam room, gymnasium, spa and sauna. Not forgetting free WiFi coverage that runs across the bedrooms, conference rooms and public areas. The Hotel Du Vin Birmingham is the kind of venue that guarantees a memorable event.

Park Regis Birmingham is the newest venue on the block, a 4-star luxury hotel that stands majestically on 158 Broad Street Birmingham, complementing the Birmingham skyline. It is strategically located in the heart of Birmingham’s city centre for excellent access. This modern structure offers meeting and conference facilities that cater for small groups to large corporate events with five rooms, including a boardroom, that can comfortably accommodate 150 delegates all dedicated to these functions. The meeting rooms are all located on the 15th floor of the building which is a strategic position that gives guests a panoramic view over the beautiful Birmingham city. There are three more meeting rooms on the fourth floor of the building just in case the 15th floor is fully booked.

This venue is not all business and no pleasure; given its 253 guest rooms and suites tailored to suit the comfort of visitors, with gorgeous designs and a sense of modernised bliss. Speaking of leisure and relaxation, the Park Regis Birmingham hotel also offers luxury facilities such as their spa, gymnasium and fitness centre. All of which work to ease your unwinding and relaxation after a successful event held at this venue. The hotel also has a dedicated reception, exclusive secretarial business services and disabled facilities all of which add up to this venue’s pride in their offering of quality and memorable corporate and leisure services.