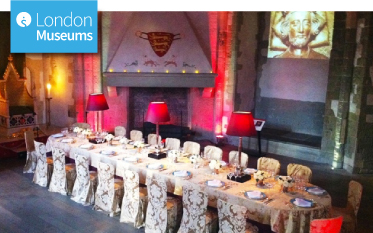 The United Kingdom has a glorious history of fabulous architecture, ground-breaking innovations and famous discoveries which to this day shine through courtesy of the outstanding, quirky and beautiful London museums which are home to many of the nation’s collections.

Within London you can visit several of these museums with the majority located a short distance from each other. They also make for a very different backdrop for private parties, business conferences and special events.

Here are three such museums that you should definitely visit and book as a premium venue for your next meeting, exhibition or corporate celebration

HM The Tower of London

One of the attractions that comes to mind when HM Tower of London is mentioned is the famous wing-clipped ravens. Believed to be the protectors of the kingdom and cared for by the stately looking Yeoman Wardens, at least six ravens must remain at the Tower at all times because an old superstition predicts if the ravens leave, the Crown and Britain will fall!

Located on the northern bank of the River Thames in central London, it is separated from the City by Tower Hill. Built by William the Conqueror in 1078, this landmark building has been a symbol of oppression, from its inception through to 1952 when it stopped serving as a prison. Anne Boleyn, Lady Jane Gray, Elizabeth 1 and Rudolf Hess are perhaps the most well-known prisoners to have been held captive. Many visiting foreign dignitaries fell under the spell of the magnificent building and wrote in awe about the Tower, which is also home to the famous Crown Jewels, including the legendary Kohinoor, which have now been on public display since 1669.

In 1988, the building was listed as a UNESCO World Heritage Site and visitors have

been able to access the remains of the medieval palace since 2006. The chambers of former monarchs and their consorts have been restored to their original glory to offer visitors a first-hand experience of Tower life.

With amazing views to enjoy, this is an excellent venue for hosting private events and the dedicated events team will help organisers experience the very best of this historic venue.

Want to see the specimens collected by Charles Darwin which changed the very fundamentals of human thought? Then you should definitely visit the Natural History Museum in London!

It was founded on the collection of Sir Hans Sloane (1660-1753) which included a small collection of plants, skeletons and stones. Today, it houses 80 million items under five categories – botany, mineralogy, entomology, palaeontology and zoology.

The museum also houses one of the foremost centres in the world for research primarily based on taxonomy, identification and conservation, as well as one of the best dinosaur collections in the world. It also has an enormous collection of books, manuscripts, photographs, journals and artworks.

In a Romanesque style and with terracotta implementations, it’s an impressive building which offers many select spaces for private events, corporate celebrations, weddings and conferences on a grand scale.

The Royal Air Force Museum London was opened on 15 November 1972 by Her Majesty The Queen and was the result of deliberations of the committee formed by the Air Force Board in 1962 under Marshal of the Royal Air Force, Sir Dermot Boyle.

It’s devoted to preserving the tales of the RAF heroes who helped protect the airways of the nation, often in the face of unimaginable difficulty, to collect money for the preservation and to help make people aware of the contribution the service made to society and its role in historical events.

At present, the Royal Air Force Museum occupies two public sites; Colindale in North London and Shropshire in the West Midlands. The entry is free to each of these sites and visitors can gain a unique experience through complementary exhibits. You enjoy an awe-inspiring collection and display of air crafts, engines, missiles, photographs, medals, uniforms and other such paraphernalia. There are films to watch, interactive sessions to enjoy, research and education facilities, special exhibitions and events which encourage visitors to look at the RAF in a different light.

The aircraft halls can be hired for evening dinners, receptions and other special events and guests are guaranteed an impressive experience sitting under the wings of Spitfires and Lancaster Bombers which are displayed from the ceilings. The tiered lecture theatre is a modern, pillar-free space accommodating up to 224 delegates and the boardroom is perfect for meetings for up to 20 people.