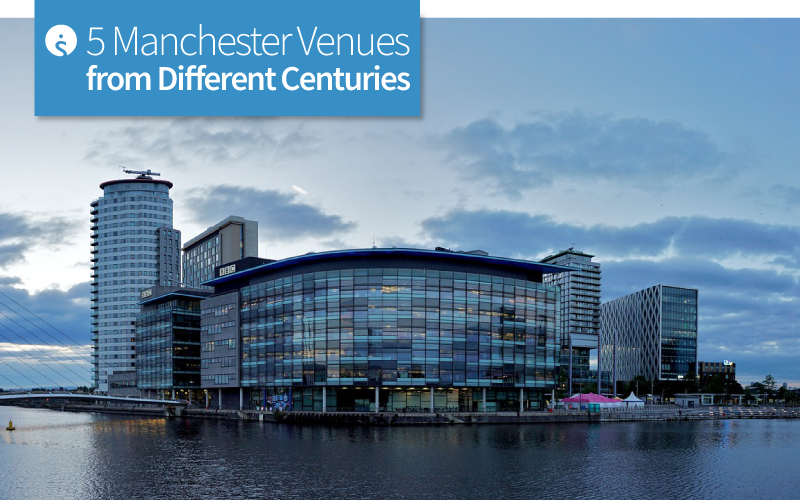 Manchester is the second-largest city in the UK and the biggest city in the north. Most people think of Mancunians as having a strong working-class culture. They think of Manchester and think of rain! Maybe not so well known is that the city is a cultural hub. It’s been a hotbed for learning, music and theatre for centuries. These five venues were built at different times in the city’s development and they are among the best venues Manchester has to offer. Each is unique and appealing in its own way. They all have rich histories and they are all available for hire for a variety of events.

Built in 1903, this Edwardian hotel has a unique red facade that incorporates turrets and towers. It’s a classic of early 20th century architecture.  Built to withstand the polluted atmosphere of industrial 20th century Manchester, it has a rugged, yet elegant, look. It was rumoured that its surroundings were deliberately spared during the bombing raids of the Second World War. It was a famous facade even then and then makes it into our top five Manchester Venues from Different Centuries! This building has been witness to many important moments in business and political history. Winston Churchill often stayed here when he had speaking engagements in the city. Charles Rolls and Henry Royce met here. They started making their iconic cars in the city of Manchester in 1904. This hotel has been an icon in the city of Manchester for generations. The Queen Mother enjoyed dining here. Famously, The Midland turned the Beatles away when they were first becoming popular, because the fab four would not adhere to the dress code. Decades later, things have relaxed a bit. Victoria and David Beckham famously went to The Midland for their first date in the late 1990s. Pop cultural history and celebrity sightings are not all this hotel has to offer though! One reason prominent people love this hotel is for its combination of elegance and practicality. The Midland offers ample parking and is close to lots of public transit options. It’s a great choice for business functions because transportation is so easy. Oxford and Piccadilly stations are nearby.

Elegant columns and tiled floors set the spacious, elegant lobby apart. The French restaurant is Michelin-starred so organisers can be confident of excellent dining options. Meeting rooms are spacious, with updated carpeting. The Midland is a great choice for business meetings, conferences and even private engagements. WiFi is free. There’s an in-house AV production team, a concierge and a dedicated event organiser to assist. This is a great place to hold a wedding, engagement party, anniversary, Bar Mitzvah or other personal celebrations. Fourteen meeting, event and conference rooms are available. Some are intimate, for serious negotiations and limited attendees. Others are suitable for huge annual events. The largest accommodates 700 guests.

Next on the list of Manchester Venues from different centuries is the impressive Manchester Central. It’s older than the The Midland. The established venue dates from the 1800s, and sits right across the street from The Midland. Both buildings were built by the Midland Railway Company so it’s no surprise then that Manchester Central was once a railway station! Today, Manchester Central has transformed into a venue for business functions and exhibitions of all kinds. This venue is unique for its age and architectural details. It also lives up to its name: this is one of the most centrally located, easily accessible venues in the city. Manchester Central first opened in July 1880. At that time, it was one of the most important railway hubs in the UK, connecting directly to London in the south. It remained an important railway station until the late 1960s. By the 1980s, transportation had moved on and it was time for a change. In 1986, Manchester Central re-opened as an event venue. It was immediately successful. Manchester Central retains its unique, vaulted, rounded ceiling from its railway station days. The station’s clock is also another detail that really sets it apart from other venues.

Manchester Central offers in-house catering, a concierge service and free WiFi. Function rooms in this venue include the Exchange Auditorium, which seats over 800 people. Exchange Hall seats over 1,200 people and offers 1,800 square foot of space. The hall has an open, inviting floorplan that can be customised for many types of events. It’s a great choice for product launches, industry conventions and annual holiday parties for large companies. The high ceiling and industrial look of this space make it a great choice for oversized art installations or other exhibitions, too.

The AC Hotel Manchester Salford Quays was built in the aughts. It’s located in the fashionable Salford Quays district. This area was once full of working docks which were opened by Queen Victoria in the 1890s, to great fanfare! Like Manchester Central, by the 1980s the docks were closed and a redevelopment scheme was launched. The Lowry, a performing arts centre, was one of the first anchors in the Quays. The regenerated area quickly drew fashionable young professionals and creative types. The AC Hotel Salford Quays is eight storeys tall. Opened in 2008, it looks sleek and modern, with clean lines and minimalist architecture. The flat roof extends beyond the hotel itself, adding a pop of visual interest. The interior design is sleek and modern. This venue has a hip and youthful feel. It offers all the amenities businesses need when planning meetings, conferences and parties. Wedding receptions, engagement parties and corporate celebrations can all be accommodated here.

The AC Hotel has a full-time event organiser. This person will help coordinate any event and handle logistical questions. Free WiFi is available. Three eateries are located on-site: a bar, brasserie and restaurant. There are three meeting rooms on-site designed for conferences and other functions. Smaller room options hold about 40 people. The largest can hold up to 100 people. This venue is a great choice for smaller, more intimate events in the hip Salford Quays neighbourhood.

The Bridgewater Hall dates from the latter years of the 20th Century. This building features ultra-modern glass, concrete and steel construction. It’s very angular, with a unique silhouette that juts out into the skyline. This venue was constructed to replace the old Free Trade Hall, which was damaged by bombing during the Second World War. Home to The Hallé Orchestra, Bridgewater Hall has excellent acoustics and is designed for performances and other functions.

The Hall can be rented for private events, meetings and conferences. Also, the venue is popular for private parties and charity evenings. Event organisers can combine a meeting with an evening concert to entertain clients. It’s a wonderful place for wine and cheese tastings, product launches and fundraising parties. The contemporary interior design is neutral and works with nearly any colour scheme. Weddings, anniversaries and engagement parties are popular at this venue. The Bridgewater Hall is a modern venue and it accessible for disabled users. Free WiFi is available and there is an AV production team on staff. This venue offers both conference rooms and open spaces for gatherings which can be personalised in a number of ways.  Located on the Rochdale Canal, the waterfront location looks wonderful and offers excellent views for event attendees. Famously, the Open University holds its graduation ceremonies at this venue annually. It’s a great place for events representing important moments in people’s lives. The dramatic look of the venue is a great backdrop for milestone photographs.

Built in 1964, The Mercure Manchester Piccadilly Hotel is a unique building located in the heart of the city. Its unmistakable mid-century architecture sets it apart from other event spaces in Manchester. The Mercure Manchester Piccadilly Hotel takes its name in part from the recently updated Piccadilly Gardens which it overlooks. The gardens have been the largest green space in Manchester since 1914. They’re famous within the city and outside it. Nearby transit options include both Piccadilly and Victoria railway stations.

This centralised location of the Mercure Manchester Piccadilly makes it a great fit for business functions. There is ample parking available, along with great public transportation options. It’s easy for out-of-town business representatives, wedding guests and other travellers to reach this venue. The décor celebrates Manchester’s history, particularly the music scene that grew there in the mid-to-late 20th century. There’s a bar and restaurant on the premises for the convenience of overnight business travellers.

The Mercure Manchester Piccadilly Hotel has a unique silhouette, with both vertical and horizontal parts of the building. Conference rooms and meeting spaces of various sizes are available. The hotel offers ten spaces for events. A wedding planner service and a variety of special event packages are available. In the International Suite, there’s space for up to 650 sit-down guests for events like weddings, bar mitzvahs and more. For conference set-ups, it can accommodate up to 800 people. Smaller spaces are available for meetings, private dinners and private events.

Manchester has long been one of the most important cities in the United Kingdom. Host your event with one of these venues, each built at a different time in the city’s history. Each of these venues reflects a unique moment in Manchester.